Greetings!  It’s been a while since we published anything on CSNorcal.org, but hopefully it will soon start seeing some activity again.  We’ll be exploring healing in the Northern California area and also encourage innovation and new thinking and inspiration around the topics of both individual demonstration as well as our collective missions.

Do you have any inspiring stories, topics, events, activities or talks you’d like to share with the local community?  Please contact us and let us know so we can share it far and wide.

In the meantime, you can find local activities in ChristianScienceCalendar.org.

Current theme: “O send out thy light and thy truth: let them lead me; let them bring me unto thy holy hill, and to thy tabernacles.” — Ps 43:3

The new website is coming along! Jason Marsh here, and I’ve been updating the prior website structure to be more appropriate for our new organization and the new mission of NorCal Church Alive. So far the look and feel is mostly done, and so more structural organization will continue forward. 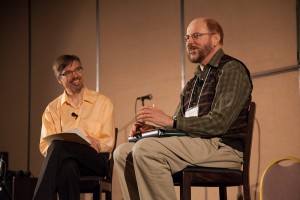 I should note, though you’ve probably received explanatory emails on this, that the Summit Committee has now disbanded and has been replaced by “NorCal Church Alive”, an association with the mission of continuing a forum for Church Alive topics within Christian Science Churches in northern California and western Nevada. It is this new committee that is supporting this website.

Some of the Discussion Groups have really taken off, and others are, well, in need of some more energy. Together we can nurture those activities that are needed, and those needs may change over time. But some really good ideas are being shared, and this website will continue to change to better distribute those ‘bright lights’ of change. The Discussion Group ideas will percolate up to this site, where more can join in the conversation.

Post comments below for your questions and comments about this website, I’d love your ideas. This is your site after all, and our churches are all walking together on Life’s journey. 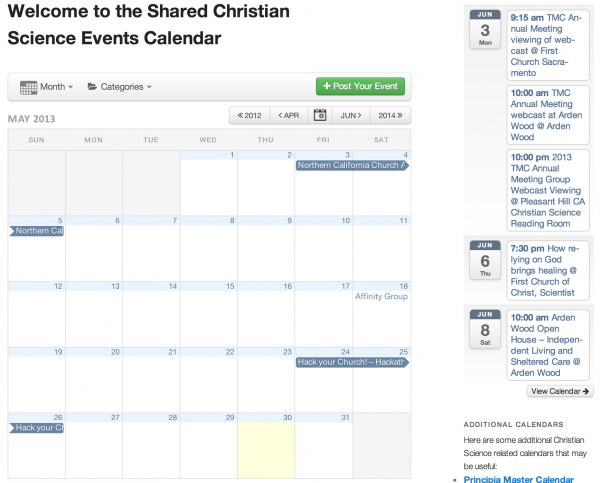 We announced the launch of ChristianScienceCalendar.org at the Summit and already there are over 30 churches and organizations signed up.  If your church hasn’t joined yet, here is the link to sign up.  It’s free and we’re hoping to get as close to 100% participation by area churches by the end of the year.

Check it out, and add your upcoming events!

You can view a great slideshow of pictures taken by Rafael Ramirez below.

“You were all called to travel on the same road and in the same direction, so stay together, both outwardly and inwardly. You have one Master, one faith, one baptism, one God and Father of all, who rules over all, works through all, and is present in all. Everything you are and think and do is permeated with Oneness.

But that doesn’t mean you should all look and speak and act the same. Out of the generosity of Christ, each of us is given his own gift.”

Ephesians 4:5 from the Message 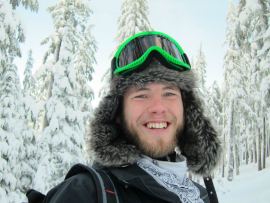 John Biggs, a TMC Youth staffer and Sunday School teacher, hosts a weekly conference call for teachers and superintendents. On the calls, he shares and explains online Sunday School resources and the whole group considers how they might be used in Sunday School. Plus, part of every call will include a run-through of how to play Radical Acts/the Game, which Sunday School teachers are finding really fun and useful in class.

George Strong holds a BA and MA from UC Santa Barbara. He has given numerous talks throughout the country and has been listed as a Christian Science Nurse since 1980. He is Executive Director for Fern Lodge Inc. and President of the Board of Directors of the Principle Foundation. George and his wife Sharon live in the East Bay where they are very active their branch church.

Susan Breuer has a Master’s degree from Stanford University and is a lifelong Christian Scientist and a listed Christian Science practitioner since 2005. She is a frequent speaker for inspirational talks and annual meetings and currently serves as Vice President of the executive Board of Twelveacres in San Jose. She is active in her branch church and lives in San Mateo with her husband Ed and their dog Ella.

Carrie Curlee is a fourth-generation Californian and a life-long Christian Scientist. She studied graphic arts and interior design, and worked for a Bay Area interior design magazine in their art department, ad sales, and later as Publication Manager. Called to support the Christian Science movement, she worked for the Committee on Publication for Northern California using her publishing skills and following legislative activity in California government. She served on the Board of the California State Institutional Committee, while developing skills as a web designer, forming her own company. Currently, she is happily learning the cattle ranching business, devoting time to her family, and “For the Love of Church”.

Carrie experienced growing in fellowship resulting from her church dwindling to thirty-five members, prompting a vote from the membership to close its doors. After a successful battle to overturn this vote, half the membership withdrew. The discouragement of being one of a handful of over-worked church goers, witnessing an ongoing shrinking membership, and the challenge to turn around what appeared to be an inevitable outcome, launched Carrie and others in a sequence of decisions and events teaching them the importance of fellowship. This fellowship was the critical factor leading to the success of the church’s ability to unite its members, embrace its neighbors, and branch out into its community. Today, that same church is vibrant, energetic, joyful, fun, reaching out, rousing, elevating, and daily demonstrating divine Science.

Her lifelong goal is to practice Christian Science with a song in her heart and fulfill the two greatest commandments of the Master, Christ Jesus: to love God and to love our neighbors as ourselves.